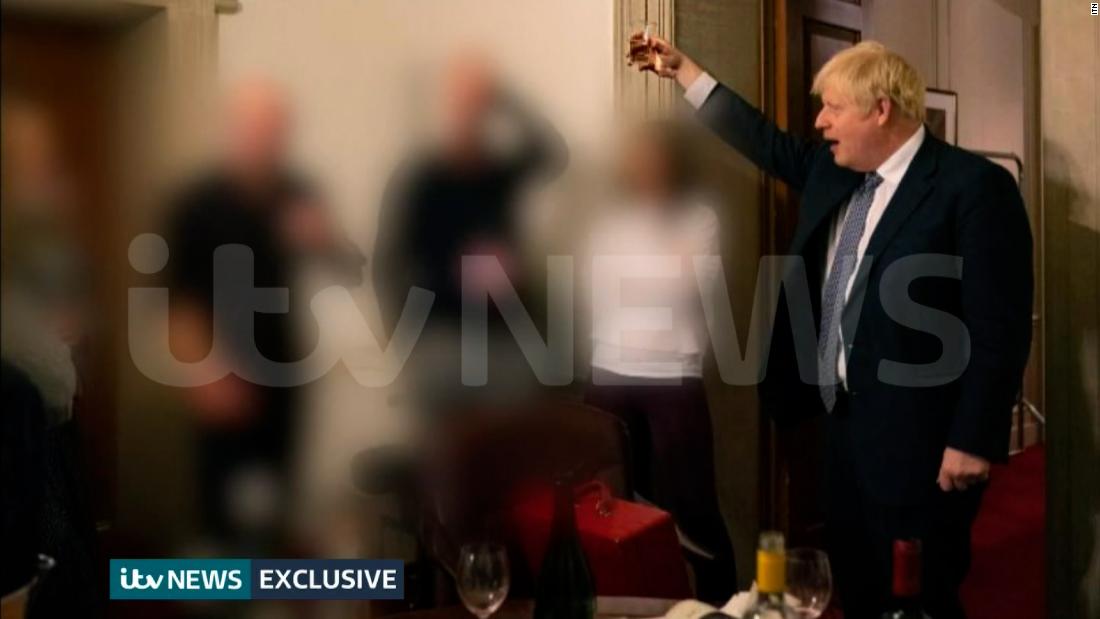 The photos, obtained by ITV News, appear to show Johnson offering a toast during a colleague’s leaving party in November 2020; several bottles of alcohol litter the table in front of him. In some of the photographs, Johnson seems to be giving a speech, the ITV News report says.

At the time, indoor social mixing was banned due to a spike in Covid-19 cases, and no more than two people were allowed to meet outside.

Johnson’s premiership has been rattled by the so-called “Partygate” scandal, which has seen months of allegations of parties and gatherings at the heart of his government during various stages of pandemic lockdown.
The UK PM initially claimed in December that no parties had taken place, but police officers ultimately investigated eight events and Johnson and his Chancellor, Rishi Sunak, have both received fines for attending one.

The new images have led to a renewed wave of outrage from opposition lawmakers, and from some colleagues in Johnson’s own Conservative party.

“Boris Johnson said repeatedly that he knew nothing about law-breaking — there’s no doubt now, he lied,” Labour Party deputy leader Angela Rayner said. “The Prime Minister has demeaned his office. He made the rules, and then broke them. The British people deserve better.”

The pictures cast doubt on a statement that Johnson made to the House of Commons in December, after he was asked whether there was a party in Downing Street on the date in question.

“No, but I am sure that whatever happened, the guidance was followed and the rules were followed at all times,” Johnson replied.

Intentionally misleading the House of Commons is a breach of the British government’s ministerial code, and usually leads to a resignation.

“I believe that the PM has misled the (House of Commons) from the despatch box. That is a resignation issue,” Conservative MP Roger Gale wrote on Twitter.

The images were revealed as Westminster awaits the publication of a report by civil servant Sue Gray into the “Partygate” events. In a brief update on her inquiry in January, Gray condemned “failures of leadership” and “a serious failure” to observe the standards of government.

The pictures have also led to scrutiny of the Metropolitan Police, whose own probe into Downing Street partying delayed Gray’s investigation, after officers decided not to fine Johnson for the event seen in the latest images.

Mayor of London Sadiq Khan told BBC Radio 4 on Tuesday it was important “police explain why they’ve reached the conclusions they have.” And former Conservative attorney general Dominic Grieve told the BBC that officers’ decision to clear Johnson for the event was “incomprehensible.”

But Downing Street told CNN the police had access to photographs and other evidence during their investigation. They added in a statement: “The Met have concluded their investigation and Sue Gray will publish her report in the coming days, at which point the Prime Minister will address Parliament in full.”

Johnson has previously apologized for the lockdown parties and has vowed to make changes to the Downing Street operation.

The scandal has tarnished Johnson’s standing in opinion polls and left his job security on a precipice for several months.

Conservative MPs have so far declined to trigger a vote of no confidence which, if passed, could force Johnson from office. But a disappointing set of local election results last month, and two difficult parliamentary by-elections scheduled for June, have maintained scrutiny on the UK PM’s leadership.