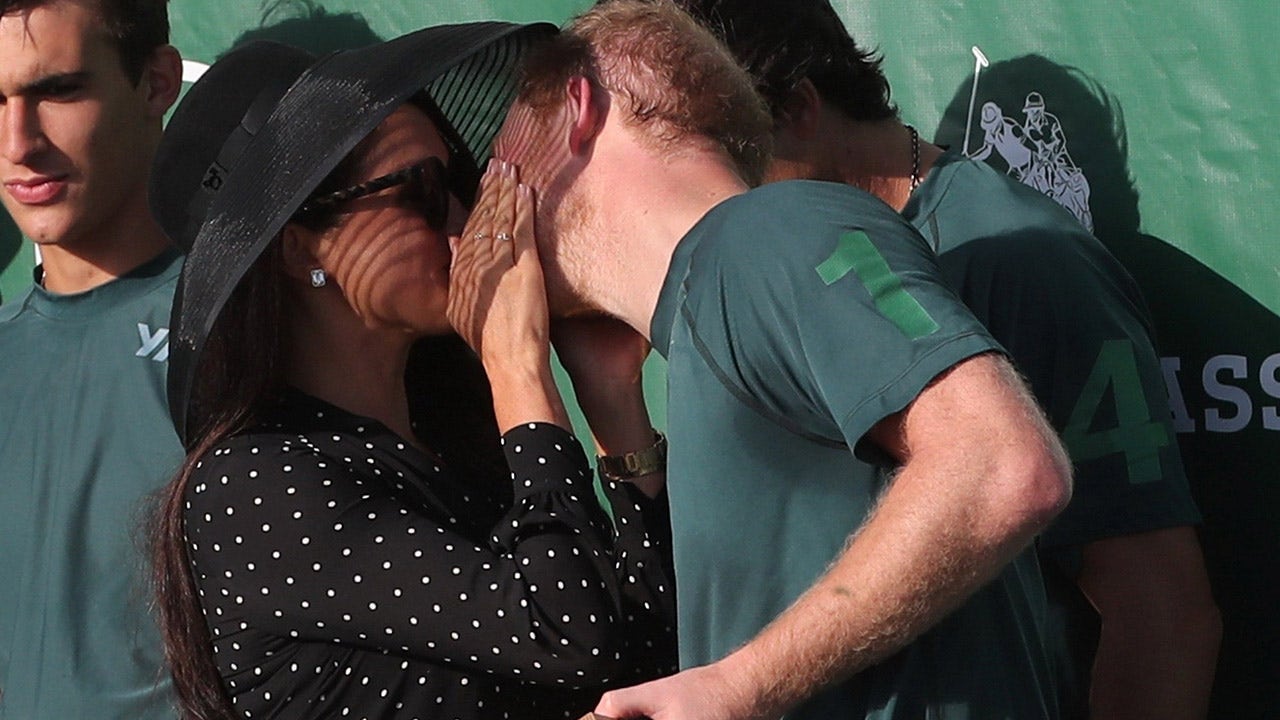 Meghan Markle made the rare move of showing a public display of affection as she kissed her husband, Prince Harry, following his polo match at the Santa Barbara Polo & Racquet Club on Sunday afternoon.

The Duchess of Sussex was dressed to impress wearing a silky black and white polka dot print blouse with white slacks as she presented her husband, 37, and his Los Padres teammates with the Lisle Nixon Memorial trophy after their big win against Klentner Ranch.

She reportedly kissed each member of the team on the cheek during the awards ceremony before grabbing Harry’s face for a sweet moment.

Coldplay’s Chris Martin, tennis ace Maria Sharapova, actress Rebel Wilson and celebrity chef Cat Cora were just a few of the stars in the stands to watch the match, which benefited the Foodbank Santa Barbara County, Heal The Ocean and the CALM4kids nonprofit.

Prince Harry and wife Meghan Markle put on an amorous display after his polo match at the Santa Barbara Polo and Racquet Club on Sunday.
(Backgrid)

Markle, 40, shielded her eyes from the bright sun with a pair of oversized sunglasses, and wore a wide-brimmed hat while watching the match with her former “Suits” co-star Abigail Spencer by her side.

She also accessorized with a gold initial necklace featuring the letter “A” for their 3-year-old son, Archie. Daughter Lilibet turns 1 on June 4.

Harry’s longtime friend and Argentine sports phenom, Nacho Figueras, 45, runs the club, and was one of the first of the family’s many high-profile friends to meet their firstborn Archie.

Figueras thanked a host of people on Instagram for supporting their efforts, in addition to fashion designer James Perse for creating the club’s uniforms.

In 2020, Figueras spoke to Fox News Digital about how, like his close pal, he grew up with the sport.

Prince Harry and Meghan Markle in Melbourne, Australia, in 2018. Earlier this month, Buckingham Palace announced that the Duke and Duchess of Sussex will be attending the Platinum Jubilee celebrations across the pond.
(Phil Noble/AP)

“I started playing polo on a farm in Argentina when I was little,” he explained. “So I think just the great thing about starting polo when you’re a child, is that you don’t really think about it. You just like to be outside riding horses. So I think it’s that having fun at the farm with other kids and just running around, not really knowing what you’re doing. So, I have the best memories of me growing up riding horses and playing polo with other children.”

Earlier this month, Buckingham Palace announced that the Duke and Duchess of Sussex will be attending the Platinum Jubilee celebrations across the pond. However, they won’t be on the palace balcony when Queen Elizabeth greets the public on June 2 as they’re not working royals.

Prince Andrew, the disgraced Duke of York, will reportedly join his mother for another special occasion.

The 62-year-old is expected to attend Garter Day alongside Queen Elizabeth and other senior members of the British royal family. He will also be listed in the next day’s Court Circular, The U.K. Times reported on Monday.

Queen Elizabeth II and Prince Andrew during Trooping The Colour on June 8, 2019, in London. He will not be present on the royal balcony at the Jubilee celebrations.
(Max Mumby)

The ceremony, which is recognized as one of the “highlights” of the royal family’s summer schedule, will take place at Windsor Castle on June 13 for the first time in three years. The prince will attend in a private capacity as a Royal Knight.

The queen, as sovereign of the order, appoints Knights of the Garter without having to consult the government, the outlet shared. Therefore, her son’s appointment was considered a private one. A palace source told the outlet that Andrew’s inclusion in the Court Circular would be “standard practice.”

The queen, 96, has been making surprise appearances to coincide with the Platinum Jubilee, which marks her 70 years on the throne. She is expected to appear on the Buckingham Palace balcony during the Trooping the Colour Parade on June 2 and greet the public.