As U.K. Offers Homes to Ukrainians, Process Lags Behind Good Will 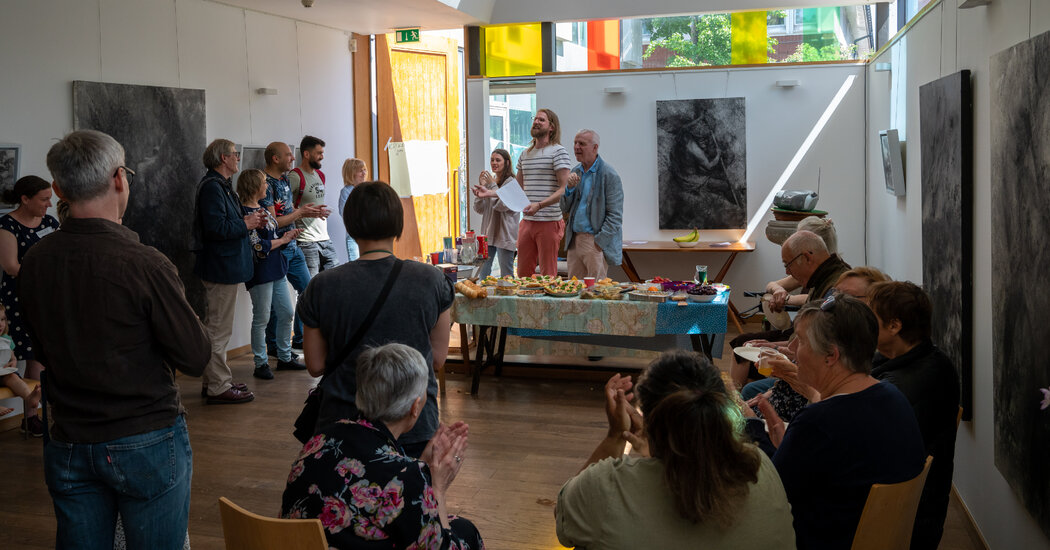 LONDON — At a church in East London this month, Imogen Moore-Shelley balanced her 6-month-old on her hip as she scrawled an important message on a poster: “Useful information for sponsors.”

She then handed her marker to Natalia, a Ukrainian woman who had moved into Ms. Moore-Shelley’s home a week earlier. Natalia then wrote the message in Ukrainian as people filtered into the church for a luncheon bringing together refugees and the Londoners opening their homes to them.

Natalia and Ms. Moore-Shelley’s story — of a woman fleeing war and finding shelter with a stranger 1,300 miles away — served as a hopeful example of a smooth transition to safety in Britain. But not every experience with a British visa program meant for Ukrainians fleeing war has been so easy, and many of the sponsors gathered at the church, unable to get clear answers from the government, were looking to one another for advice.

Weeks after Russia invaded Ukraine on Feb. 24, and amid widespread criticism that it was not doing enough to help, the British government began Homes for Ukraine, a program meant to offer Ukrainians a quick path to safety. But despite tens of thousands of Britons having expressed interest in playing host, the rollout has been painfully slow.

Aid groups, potential hosts and Ukrainians say that the program is full of pitfalls, including a difficult application process and significant delays in visa processing. They also express concerns about safety and about a lack of support in gaining access to schools and other vital services in Britain.

The program was supposed to be a response to earlier criticism that Britain had been slow to respond to the Ukrainian refugee crisis. Initially, as members of the European Union threw borders open, Britain, which left the bloc in 2021, allowed only those with immediate family in the country to even apply for a visa.

Homes for Ukraine was intended to broaden the British response, even if the program still required cutting some red tape, including a condition that hosts make direct contact with Ukrainians who need housing. Problems with this matching process have grown.

As of May 16, about 53,800 Ukrainians had arrived in Britain, with 20,800 joining their immediate family members and 33,000 arriving under the sponsorship program. More than 6.4 million people have fled Ukraine since the war began, according to the United Nations.

Mark Lillicrap, 58, who lives in St. Albans, a town north of London, and his wife have been trying for seven weeks to get visas for a family currently in Hamburg, Germany, but he said the process had been “terrible” amid “staggering bureaucracy.”

Two weeks ago, he was told that both parents had been approved but that their baby — who does not have a passport because he was born only weeks before the war began — needed to be seen at a visa application center hundreds of miles from Hamburg. Many others described similar obstacles.

The luncheon at the church was intended to help build community, but it was also a reflection of the exasperation felt by many sponsors.

Ms. Moore-Shelley, 34, who organized the event, said that she and her husband had felt powerless while watching the horrors of the war unfold on the news and that opening up their home was “a small way that we could do something.”

But Ms. Moore-Shelley described a confusing application process, a weekslong visa wait and a struggle to find someone to host. Eventually, her husband asked a Ukrainian waiter at a local cafe he frequents if he knew anyone who needed help.

The waiter, Sasha Druz, 27, put the couple in touch with Natalia, whom they sponsored. When Natalia arrived this month, no checks by the local council had been conducted on the couple’s home.

“We’ve just kind of cracked on, basically,” said Ms. Moore-Shelley, who, along with support and translation help from Mr. Druz, is helping Natalia navigate life in Britain. Natalia asked that only her first name be used over concerns about the safety of her family in Ukraine.

Beyond the program being cumbersome and mired with delays, there are also concerns about safety. The ad hoc matching — including through unofficial websites and Facebook groups — makes the system vulnerable to exploitation.

The United Nations refugee agency expressed concern in April after reports that vulnerable Ukrainians were being targeted in Britain by unfit or predatory hosts and called for better safeguarding and vetting.

A government spokesperson said that the program was “designed with safeguards in place, including checks by the Home Office and the local council,” adding that Ukrainian refugees should have access to health care, education, benefits and job support “on the same footing as U.K. nationals.”

But local councils say that they are struggling to keep up with those checks and that their resources are already stretched thin.

James Jamieson, the chairman of the Local Government Association, which represents 350 councils across England and Wales, said in a statement that the authorities needed better, more timely information on Ukrainian arrivals from both the government and the hosts to provide adequate support and to ensure safety.

Many of those who gathered last week at the East London church raised similar concerns.

Oksana Voronova, 44, who arrived in London from Ukraine two weeks ago with her 12-year-old son and is being hosted by a former colleague, said that while she was moved by the outpouring of support, she had yet to be able to enroll her son, who speaks fluent English, in school.

Zelensky urges an even harder line. Speaking by video to the World Economic Forum in Davos, Switzerland, President Volodymyr Zelensky of Ukraine called on world powers to go much further to punish Moscow. Russia, usually a major presence at the gathering, was a pariah this year.

War crimes trial. Judges in Kyiv handed down the first guilty verdict against a Russian soldier tried for war crimes. Sgt. Vadim Shishimarin, who had pleaded guilty last week, was sentenced to life in prison for killing a 62-year-old civilian.

Powerful U.S. artillery arrives. American-made M777 howitzers — the most lethal weapons the West has provided to Ukraine so far — are now deployed in combat in Ukraine’s east. Their arrival has buoyed Ukraine’s hopes of achieving artillery superiority at least in some frontline areas.

As websites and Facebook pages have emerged to fill the gap in matching sponsors with Ukrainians, so too have anecdotal reports of abuse, including accounts that some hosts are doing it solely for the monthly payments of 350 pounds, about $430, that the government has pledged to give them.

One woman, Rosa, 26, who also asked that her surname not be used because of safety concerns, moved into the home of a British couple whom she found online. But she said that they had been unfriendly and the situation tense.

Rose said that the East London luncheon had replenished her hope. “I had been so stressed, and then I came here and realized not everyone is like them,” she said.

For potential hosts across Britain, concern has risen about the difficulties in getting Ukrainians into the country at all, given the complex application process and prolonged wait for visas.

Rosie Rafferty, 53, who lives in Cheltenham, England, planned to sponsor a 22-year-old Ukrainian woman and her 14-year-old brother after connecting with them on Facebook. But after waiting for more than seven weeks for visas, she said, the siblings gave up.

In a statement, the government said that it was aware of application delays of more than a month and called them “unacceptable,” noting that changes had been made to speed up the process.

One frustrated group of would-be sponsors is now taking legal action against the Home Office, which oversees the Homes for Ukraine program, saying that promises to streamline were not enough.

Kitty Hamilton and Katherine Klinger, friends from London, are part of the legal action and have been holding twice-weekly demonstrations outside the Home Office in London with the group Vigil for Visas.

“There are all sorts of different ways in which this particular scheme, as lovely and generous as it looks from the outside, is actually not particularly well designed,” Ms. Hamilton said.

The Ukrainian family she is sponsoring arrived two weeks ago after a month-and-a-half wait for visas, Ms. Hamilton added.

Ms. Klinger is still awaiting the arrival of a family of eight that she is sponsoring. Their visas were recently approved — after six and a half weeks. “It is basically a visa form that is entirely unfit for purpose for people who are fleeing a war zone,” she said.

But both Ms. Hamilton and Ms. Klinger said that the generosity shown by tens of thousands across Britain, as well as the efforts made by the local authorities, showed a broader will to help.

“I actually think it’s a real testament to the good will of the British people, which has been consistently underestimated by this government,” Ms. Hamilton said. “They have judged us by their own standards, and they have got us wrong.”