Why Republicans Love the Land of ‘Illiberal Democracy’ 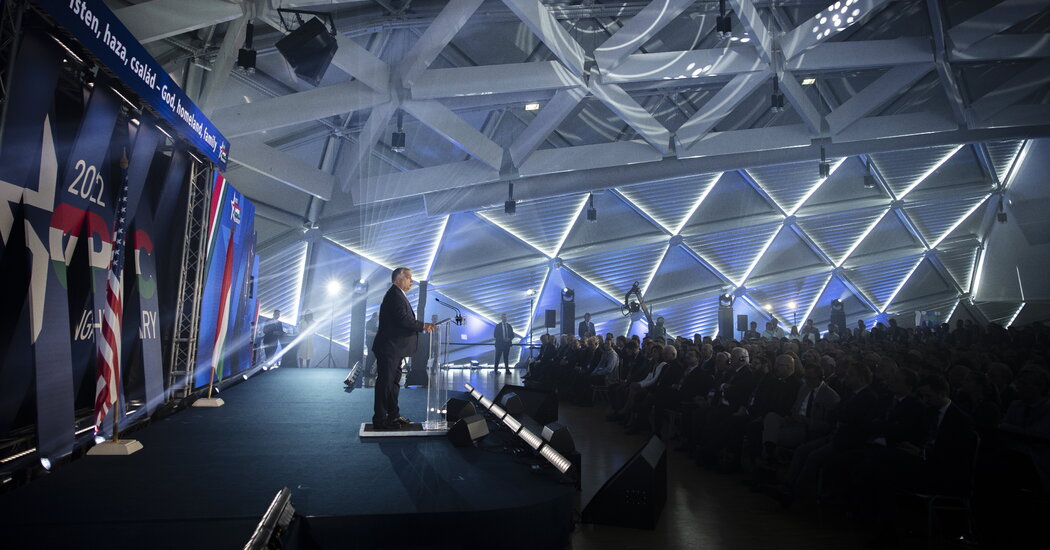 That shared goal of suppressing wokeness is why Tucker Carlson, one of the most prominent conservatives in the United States, hosted his show from Hungary for a week last year. “If you care about Western civilization and democracy and families and the ferocious assault on all three of those things by the leaders of our global institutions,” Carlson told his audience at the time, “you should know what is happening here right now.” It’s also why Rod Dreher, a popular conservative blogger and author, wrote that his readers “ought to be beating a path to Hungary.” And it’s why Donald Trump endorsed Orban’s re-election campaign not once, but twice.

Which is to say that this CPAC session may have been held in Hungary so that conservatives can learn a little more about how they might unravel American democracy in order to impose their cultural and ideological vision on the country. They even got a little encouragement from Orban himself. “We need to take back the institutions in Washington and Brussels,” he said, in opening remarks on Thursday. “We need to find friends, and we need to find allies. We need to coordinate the movement of our troops, because we have a big challenge ahead of us.” Attendees heard from Trump, his former chief of staff Mark Meadows, and Carlson himself, whom Orban singled out for praise: “His program is the most watched. What does it mean? It means programs like his should be broadcast day and night. Or as you say 24/7.”

What’s striking about this display of longing and affection for Orban’s regime — beyond the obvious spectacle of people who are ostensibly American nationalists working in concert with a foreign autocrat — is how it underscores a defining trait of conservative populists, if not conservative populism itself. For all the talk of “America First,” there is a deep disdain among members of this group for both Americans and the American political tradition.

This disdain is evident in how they talk about their political opponents. They routinely place entire groups of citizens outside of the political community. Carlson, for example, said on a recent episode of his show that pro-choice Democrats are “totalitarians” who hope to destroy religious belief in the United States.

As president, Trump routinely held out his opposition as a threat to the very integrity of the United States. “Our nation is witnessing a merciless campaign to wipe out our history, defame our heroes, erase our values, and indoctrinate our children,” he said in a speech on July 4, 2020. The culprits? “Angry mobs” and “radicals” he identified with “liberal Democrats.” Less high-profile but still telling was the assertion from a writer at the Claremont Institute, an influential pro-Trump think tank in Southern California, that “most people living in the United States today — certainly more than half — are not Americans in any meaningful sense of the term.”