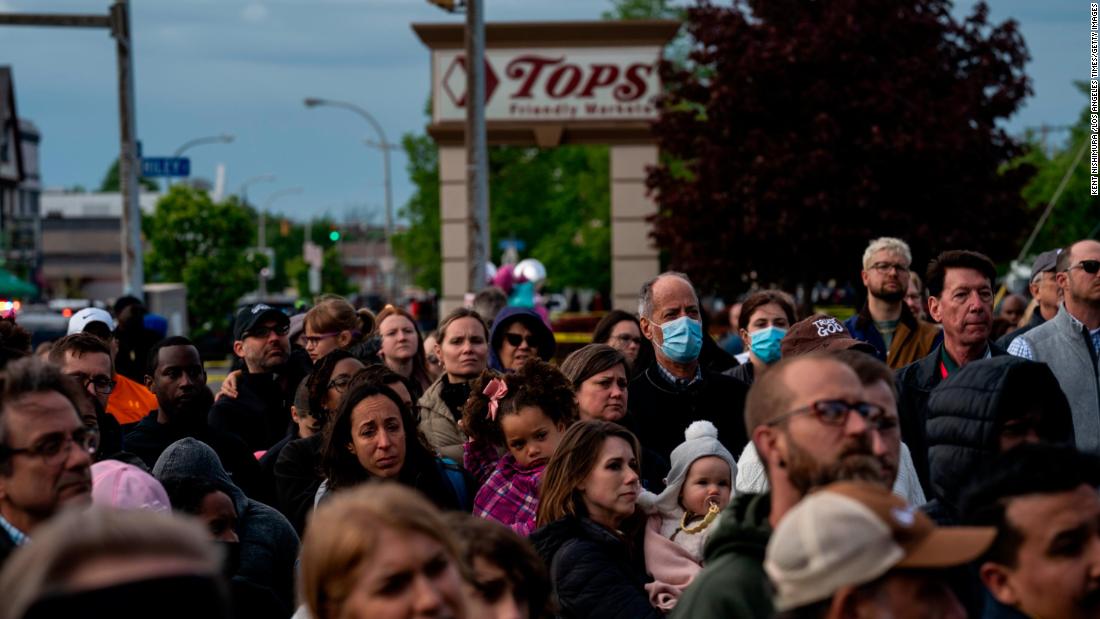 Payton S. Gendron is accused of driving nearly 200 miles to kill 10 people and wound three others in a shooting that took aim at a community hub in a predominantly Black neighborhood. He has pleaded not guilty to a charge of first-degree murder, officials said, and other charges are expected.

In court Thursday, a judge is expected to determine whether there’s sufficient evidence to continue jailing him on that charge. The judge is also to hear from the defense and prosecutors, who may present new evidence.

Authorities are investigating the shooting as a hate crime and an act of racially motivated violent extremism. Of the 13 victims shot, 11 were Black.

In online posts by Gendron on the chat app Discord and in a 180-page document investigators believe he wrote, he described himself as a White supremacist, fascist and anti-Semite. He wrote he targeted the Buffalo supermarket because it had the highest concentration of Black people in upstate New York and said he subscribed to “replacement theory,” a conspiracy theory that claims a cabal of elites are trying to replace White people with non-White immigrants.
The suspect’s social media posts have become central to the investigation because they offer details about how he planned his attack and his motives.
In posts first shared on Discord, then more widely on the hate-filled online forum 4Chan, Gendron said he visited the grocery store multiple times on March 8 to learn its layout. He noted how many Black and White people shopped during his visits and drew a map of the store’s interior, according to his posts.
The suspect also livestreamed the shooting on the website Twitch. The company said it took down the video within minutes, but social media companies were struggling to contain its spread.

While the suspect is behind bars, New York officials have called for further examination of how he was able to get guns and how he communicated his plans online.

In June, Gendron showed a warning sign of potential violence when he made a school project about murder-suicides when he was a student at Susquehanna Valley Central High School in Conklin, New York, officials said.

Police were called to the school, and he was taken for a mental health evaluation and later released. At the time, police didn’t seek a “red flag” order of protection against Gendron.

The red flag law, also known as the Extreme Risk Protection Order law, is designed to prevent anyone who shows signs of being a threat to themselves or others from purchasing a firearm, New York’s website states.

But because the evaluation was not an involuntary commitment, it did not prevent the suspected shooter from purchasing or possessing a gun under federal law, said New York State Police spokesperson Beau Duffy.

Since the shooting, Gov. Kathy Hochul has proposed a gun laws package, as well as other changes to law enforcement protocol when a person shows they may be harmful to themselves or others.

On Wednesday, Hochul said she would sign an executive order requiring state police to file an “extreme risk order of protection” under the red flag law when they believe that an individual is a threat to himself, herself or others.

The gun laws package would aim to close loopholes around specific types of guns that fall outside current regulations, including high-powered, concealable guns and those that can be modified to hold high-capacity magazines, she said.

The proposed legislation would remedy “just one of those enormous loopholes that you can drive a truck through,” she said.

The probe, disclosed Wednesday by James’ office, focuses on Twitch, Discord and the websites 4chan and 8chan (now known as 8kun). Other as yet unnamed companies could also be drawn into the investigation, James said.

The investigation is expected to focus on companies that “the Buffalo shooter used to plan, promote, and stream his terror attack,” James announced in a tweet.