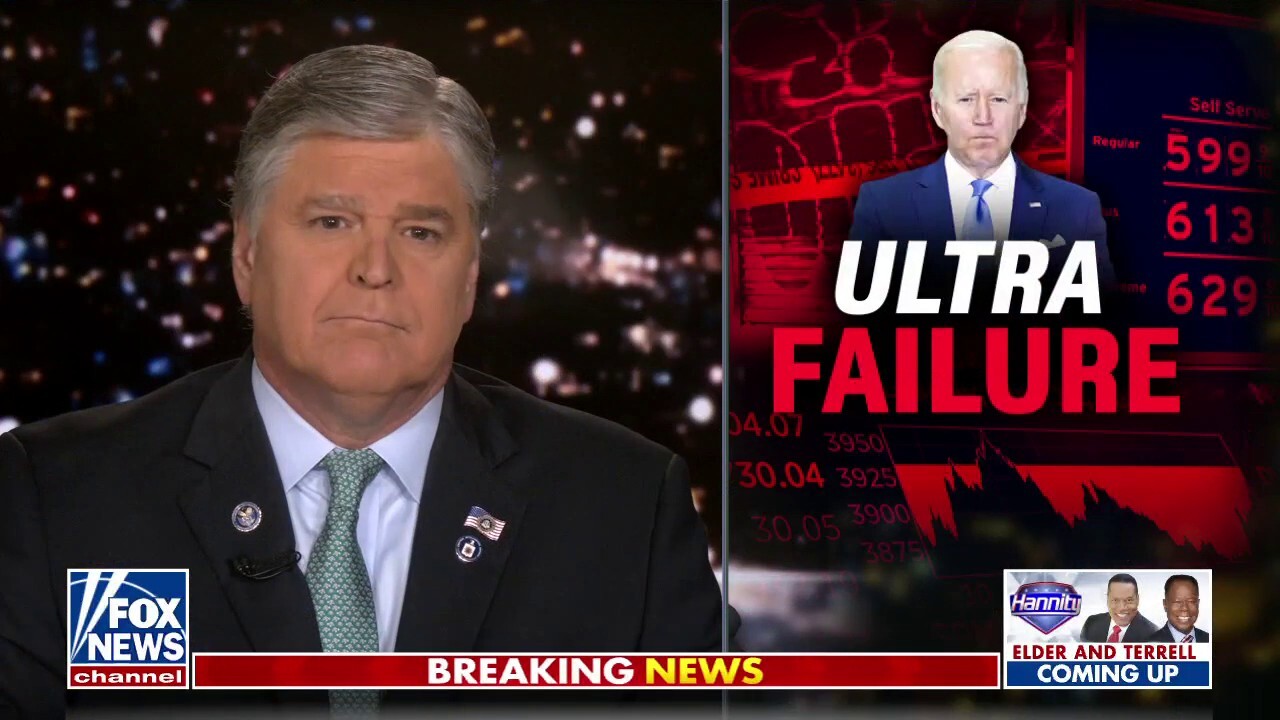 HANNITY: It’s critically important that the GOP regains majorities in both the House and the Senate in the fall. After two years of total Democratic control, this country is falling apart, dangerously so. Look at the stock market today, it tanked yet again. Inflation at a 42-year-high. Interest rates now going up through the roof. This is really crushing everyone in this country, especially the poor, the middle class, our fellow Americans on fixed incomes. And now top economists are calling stagflation, quote, “unavoidable.” The CEO of Wells Fargo saying, “there is no question bad days are ahead.” Analysts Morgan Stanley, smart people, they’re blaming the Biden administration for their inflation. And even far left ‘Vox’ is blasting Joe’s out of control spending.

HANNITY: BIDEN HAS ‘NO PLAN’ TO CURB INFLATION AND IT’S NOT TRANSITORY

And it gets even worse, today yet once again, gas prices shooting to the moon. And today, another brand-new record high price for a gallon of gasoline. In fact, every day for the past nine days, gas prices set one new record after another. Now, this year, American families will have to fork over anywhere between $5,200 to $5,700 and going higher thanks to Joe Biden’s inflation. By the way, if you drive a car, you’re going to pay $2,000 more on average just for gasoline this year over when Donald Trump was president.

WASHINGTON, DC – MAY 10: U.S. President Joe Biden speaks about inflation and the economy in the South Court Auditorium on the White House campus May 10, 2022 in Washington, DC. Biden stated that tackling the rising prices is his top domestic priority and accused Republicans of not having a plan to fight inflation. (Photo by Drew Angerer/Getty Images)

Look at Quinnipiac, 2%. That’s right. 2% of Americans now believe our economy is in excellent shape and they know just who to blame. A whopping 63% blame Joe Biden, our ultra failure of a president. Want to talk about ultra? He’s an ultra failure. By the way his approval rate, look at that, is at 32% over the past year-and-a-half as Americans have suffered from a supply chain crisis. Now a baby formula shortage. Spiking inflation. Spiking gas prices. A stock market in a free fall.

We do have great news tonight, the ‘Ministry of Truth’ or Disinformation Governance Board, as it was coined, is now on pause. And that far left lunatic tapped to lead this shady new venture has now resigned.